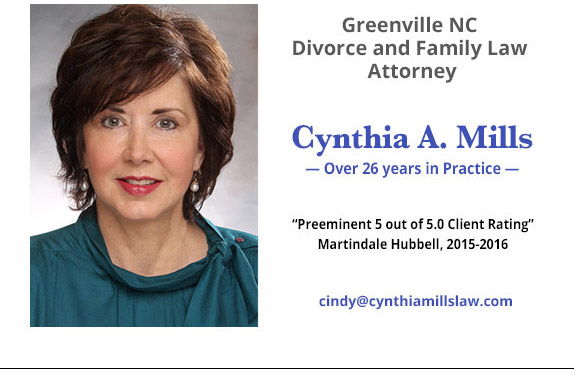 Cindy Mills is a caring lawyer known for her supportive and compassionate manner. She is even better known as a formidable force in the courtroom and a savvy negotiator who possesses a keen working knowledge of North Carolina family law.

Described by a local magazine as a “preeminent power attorney” and “the clock cleaner,” Cindy won an award of $5.9 million for a client in an alienation of affection lawsuit in July 2010 – the second highest judgment ever awarded in North Carolina at that time. Cindy has prevailed in a number of family law cases for clients before the NC Court of Appeals.

In 2015 and 2016, Cindy earned the prestigious “Preeminent 5 out of 5.0 Client Rating” from Martindale Hubbell. She is passionate about providing high-caliber representation for her clients whether they are dealing with a simple legal matter or entangled in a contentious complex family dispute.

Cindy began her career in private practice in Charlotte, NC in 1989. She returned to her native Pitt County in 2002 and joined the law firm of Blount and Crisp which became Blount, Crisp & Mills. In 2002, Cindy established Mills & Economos as owner and managing partner. She opened The Law Office of Cynthia A. Mills as a sole practice law firm in 2013.